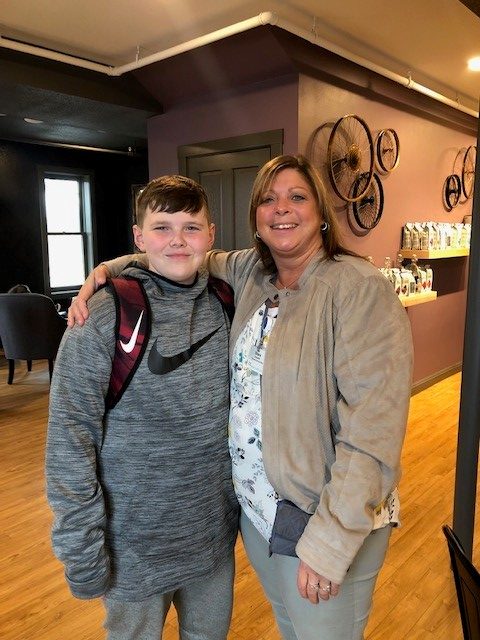 Recently I met up with Shana Douyette in Menomonee Falls, near her work (and mine). Longtime friends of HOPE Network may remember that she won the Edmund Springman Educational Grant in 2009 to complete a program in medical billing and coding. She completed her program in 2009 and, after a circuitous journey through the healthcare field, landed recently at a clinic in Menomonee Falls.

Along the way, she gained more than a new job. Her second son, Caden came along in 2010, making Caleb (now 11) a big brother. And she recently added another member to the household. Shana is fostering her two year-old nephew and aims to gain custody of his five month-old sister as well. Shana’s niece is currently living with another foster family, due to space limitations at the Douyette residence, but Shana is determined that she know family and is working to make that happen.

In fact, Shana’s “big heart” (the meaning of her name) extends to a wide variety of family members. She provides weekly “meals on wheels” to her mother and grandmother. Her 93 year-old grandmother, she says, is easy to care for, turning “three meatballs and some rice into meals for a week!” She also helps care for other nieces and nephews. Sixteen year-old Terrell, a determined future Marine, is particularly close to the family. Shana says, “My kids really look up to him, without having a male figure in their life. I know he’s young, but he’s someone they look up to.”

Terell was able to join Shana and the boys on a recent trip to Chicago. This was the boys’ first time out of the state. Shana says she tries to plan something fun once a year. Through her employer, she scored a deal on a hotel in nearby Shaumburg. The boys enjoyed swimming at the hotel pool, along with visits to Willis Tower, Millenium Park (where they rented quad bikes), and some of that famous Chicago mixed popcorn.

The highlight of the trip, Shana says, was definitely a stop at Navy Pier. At first, she assumed the pricey attractions were out of the question. However, a lady leaving the area passed along game cards, allowing the family to enjoy the ferris wheel, swings, and more. Shana exclaims in remembering, “Am I being blessed or what!” The boys also insisted on a trip to their favorite universal attraction: McDonald’s. Shana was happy to oblige, saying, “The trip was for them, too.”

Most of the time, the family stays closer to home. Caleb plays soccer through a scholarship from Milwaukee Kickers. In order to qualify, Shana is required to volunteer 60 hours a year for the Kickers. Caden is interested in coding and robotics, taking advantage of opportunities to explore both through his school. Both boys love video games, though Shana limits their screen time. She insists on screens being off at least half an hour before bedtime. The family enjoys game nights and movies, attending a show when they can afford it.

Now on her radar: summer school. She’d love to see her boys continue their studies in math and reading over the summer, but transportation is a challenge. The school district is working with her on a solution that will allow the boys to continue to progress over the summer. Caden’s teacher, Ms. Johnson, has even offered to tutor him three days a week.

Shana says more education is out of the question at this point; her days are full. But she encourages others to follow their dreams and never give up. Her grant from HOPE, she says, was an enormous help at a time when she was building her career skills, with limited income. She values showing her kids, her nieces and her nephews the path to being a successful adult and shared this advice from her grandma. “If you’re 35 and you don’t have your life together, you’re never going to.”

Attention past winners: If you are interested in being featured in an upcoming article, email liz@hopenetworkinc.org.

1 thought on “Catching up with 2009 scholarship winner Shana Douyette”