In her own words

My name is Tracey Davis. I am a single mother of one daughter and three sons ages 16, 15, 11 and 8. I became a mother at the very young age of 18. I had just graduated from high school and enlisted in the United States Navy. I had planned to travel the world. Since motherhood had not been a part of my plans, I’d never even considered that I’d become a single mother. It was devastating and caused me to further alter the plans that I had made for my life, which now included raising four children as a single parent. BUT GOD.

This has been by far, one of the hardest things that I have ever done. But to have earned my degree, was most definitely worth all of the blood and sweat, as well as each tear, and trust me, I cried a lot.

The struggle of being a single mother, while working both full-time and part-time jobs, left me feeling defeated many days. I cannot say that I didn’t consider giving up once or twice - I did! But I was given some advice that has always stayed with me. I was told by my aunt: “Tracey, you can’t be good for those children if you are not good for yourself. Get your degree and use it to better your lives.”

My uncle would constantly reinforce the fact that I had to focus and eliminate distractions. He promised that he’d always be in my corner.

My mother, knowing the life of sacrifice she had often made as a single mom, saw in me a younger version of herself. She made it a point to remain strong when I felt weak and defeated. My family became my rock and their support of my journey eliminated “giving up” as an option for my life.

My children, they were forgiving. They motivated me, especially on days when I would miss one of their school concerts, rehearsals or basketball games because of my night classes, or working one of the two jobs.

They are still rooting for me. Sometimes I can hear them telling their friends: “My mom is going to be a lawyer.” And with each of those times, though I’m so tired right now, I force myself to keep going.

They are seeing how much work goes into realizing a dream. I am their living example. That is where my strength and endurance comes from.

Reflecting on my journey, which is still not complete, has me in tears right now. I won’t sit here and say that I am nothing short of blessed, and that the past decade of my life was easy. IT WAS NOT. But, I will offer some advice that I learned along the way:

- Stay prayed up, because my God is an awesome God who will always clear any hurdle.

- Appreciate your children as gifts, because they are often all that you need to make anything happen.

- And never give up! I may have been older than many of my classmates, but we all walked across that stage the same way.

I MADE IT AND YOU WILL TOO!

Thank you to my family, my friends, Marquette University and HOPE Network for believing in me and seeing me through. 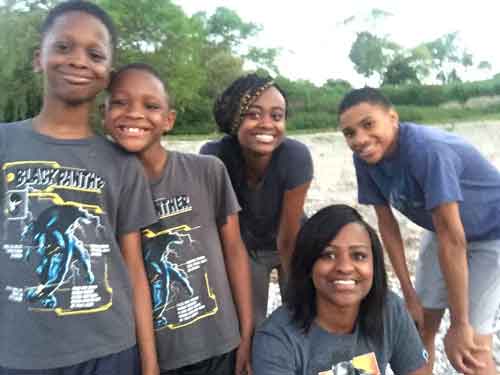 Tracey and her children
read other scholarship winners' stories